How can you be assertive WITHOUT coming across as pushy? First, understand that there is a fundamental difference between the two and that is INTENT. When you are being assertive you are mindful of the INTENT behind your communication. When you are pushy, your primary concern is yourself.

That being said, bear in mind that communication is a 2-way street. There is a Receiver and a Sender. Sometimes, if the Receiver is distracted or not fully involved in understanding the message being sent, the message or behaviour could be perceived as pushy. Most times, you have the power to control it.

Behaviour is situational and very often subjective. We each bring to bear on a situation all our experiences, expectations, judgments, thoughts and emotions. These are different for every individual so no two will have the same interpretation.

When discussing assertiveness, I am also mindful that there is often a gender bias. Women and men behave differently and interpret the behaviours of the other through the lens of what they know. 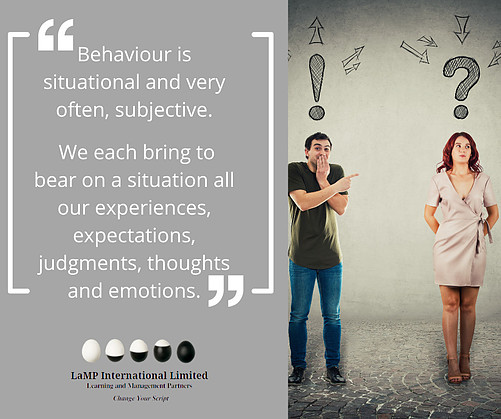 Speaking up can be one of the most nerve-wracking things you may ever have to do. This may be complicated by the fact that your self-esteem or self-confidence may be low or it is just not accepted practice in your culture.

I was born in the Caribbean and at the age of 6, migrated to England. Most of the Caribbean was developed under the umbrella of the Commonwealth which is shaped largely by British behaviours. As children, we were taught that “children are to be seen and not heard“. In other words, we were not taught to express ourselves let alone assert ourselves.

Fast forward to my adult years, working within an American environment where expression is nurtured from an early age. At first, I viewed most of my peers as pushy and inappropriately vocal. Most of the time, I kept my thoughts and feelings to myself.

I certainly did not want to be viewed as pushy!

The Journey Towards Assertiveness

Over time, I learned that I had to find an appropriate way to get my message across. If I kept silent and to myself, I would remain stunted and alone. Even worse, if I allowed my internal thoughts and feelings to build, it would weaken me internally and even cause some major aggression.

Rather than moving from passive to aggressive behaviour, I challenged myself to understand and practice behaviour that was assertive and congruent. It was not an easy journey as I had many aspects of me to unlearn.

As the years passed by, I became more and more assertive.

I returned to the Caribbean to live and work and found myself struggling, again. This time I was stuck in the middle, so to speak. The surrounding behaviours were mostly either passive or aggressive and my assertive behaviours were interpreted as pushy.

It was a reminder of the role that environment plays in our development.

To assert yourself means to build up enough courage to express yourself in a way that engages and has the intent to be a win-win for all parties involved. That’s my long version.

My short version is that asserting yourself often means putting the other party’s needs before your own.

What exactly do I mean by that because it does sound a little conflicted, right?

Over the years, as I continue to support others with their behaviour changes, (and as I also change and adapt in the process), I have come to realise that when I communicate my intent clearly, my assertiveness is more effective. Interestingly, this learning was validated even more during the pandemic. 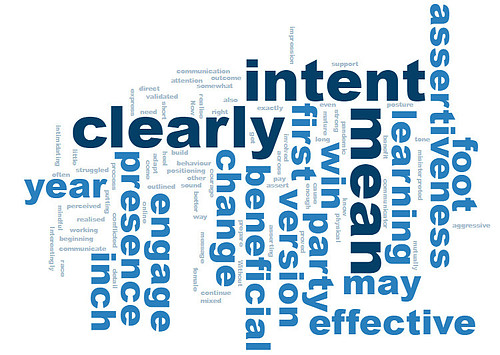 Without the benefit of physical presence, I had to prepare better to engage and get my message across clearly. In the beginning, I struggled somewhat until I realised that if I clearly outlined my intent for a mutually beneficial outcome first, communication was more effective.

I am a mature, mixed-race, 5 feet, 7½ inches (5 feet, 9 or 10 inches with heels), female with a strong presence and a direct communicator. I know I may be intimidating to some and that can be perceived as being aggressive.

My learning during those online working years proved to be very beneficial. Now that I am more mindful, I pay attention to my positioning, first impression, tone, posture and the other details that may cause my assertiveness to be misinterpreted.

How To Position Your Intent

So, what is the intent that I am referring to?

You can attain the result you want by making some simple changes to the way you communicate. Let me share an example.

I am at a function and walk into a discussion. As a way of creating space for me to participate, someone says to me:

“Cassandra, this is right up your alley! Jennifer and I are discussing the need for more stringent management policies for attendance. I know that you are a stickler for time. What do you think?”

In the past, I would dive in blindly and simply drop my opinion into the mix. Not anymore! 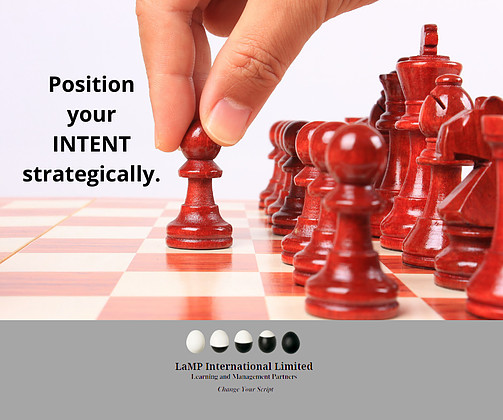 Clearly, from the invitation to participate, they are on different sides of the fence. Now, my preferred response would be:

“You know, as much as I am a stickler for time, there are times when there may be a need for some flexibility. Is this the context within which you both are sharing your views?”

See what I did there? (As Raymond asks in the video below.)

I rephrased the question and opened another door for me to understand what perspectives were being shared. In that way, I have a sense of the intent of both persons and I can effectively and assertively introduce my own. In doing so, I may even be able to bring some further understanding to the discussion and narrow the divide.

My intent is to include, not exclude anyone’s opinion.

Listening Is Your Most Powerful Tool

During my early career, I worked with a Senior Executive who provided counsel to a wide cross-section of people. His office was a revolving door. During meetings, I was in awe of the fact that his opinions and ideas were always requested. I admired his way of functioning and wanted to be like him.

In those formative years, I was fiercely introverted. Most of the time, I kept my thoughts to myself and when I spoke, I was very opinionated and aggressive. I was perceived to be either passive or pushy.

I found the courage to ask him about his style one afternoon. He leaned back in his chair, smiled at me for what seemed like an hour and then responded: “Listen.”

“That’s what I am doing. That’s why I am here.” was my response.

“That’s not what I mean,” he said. “What I mean is that you have to REALLY listen to what is being said and not said and THEN, when invited, CALMLY share your thoughts. It is the MOST powerful way to assert yourself and become an in-demand communicator.”

We continued to discuss that matter for a couple of hours and it turned out to be a pivotal point in my career leading me to change my career direction from a technical path to a behavioural one. I am still on that path but much, much wiser now, thankfully.

I still speak less than most people, (I am an introvert, after all), but now people seek me out to hear what I have to say and that resulted from me learning to listen to others with positive intent and an inclusive goal.

There is a fine line between being assertive and being pushy. Although you cannot control the thoughts and behaviours of others, you can influence them and lead them to adapt favourably for you. Achieving this begins with you being clear on your intent and recognising the power you have to control the outcome.

It does start from a place of self-awareness though. When you are aware of your strengths, behaviours and how others may be inclined to perceive you, you position yourself in a better position to communicate effectively and be appreciated for behaving assertively.

Being almost 5 feet, 8 inches, both men and women find my physical stature to be somewhat intimidating. The way in which I enter a room or ask a question could easily be interpreted as being pushy or self-indulgent.

However, after many hard knocks, I have learned that the simple acts of clearly defining my intent and genuinely listening could place me in an assertive and well-appreciated direction from the get-go.

If you want a different result then,

Invest In Your Learning and Growth

Become a Certified Online Entrepreneur. The first 5 lessons are on us!

We use cookies on our website to give you the most relevant experience by remembering your preferences and repeat visits. By clicking “Accept All”, you consent to the use of ALL the cookies. However, you may visit "Cookie Settings" to provide a controlled consent.
Cookie SettingsAccept All
Manage consent

This website uses cookies to improve your experience while you navigate through the website. Out of these, the cookies that are categorized as necessary are stored on your browser as they are essential for the working of basic functionalities of the website. We also use third-party cookies that help us analyze and understand how you use this website. These cookies will be stored in your browser only with your consent. You also have the option to opt-out of these cookies. But opting out of some of these cookies may affect your browsing experience.
Necessary Always Enabled
Necessary cookies are absolutely essential for the website to function properly. These cookies ensure basic functionalities and security features of the website, anonymously.
Functional
Functional cookies help to perform certain functionalities like sharing the content of the website on social media platforms, collect feedbacks, and other third-party features.
Performance
Performance cookies are used to understand and analyze the key performance indexes of the website which helps in delivering a better user experience for the visitors.
Analytics
Analytical cookies are used to understand how visitors interact with the website. These cookies help provide information on metrics the number of visitors, bounce rate, traffic source, etc.
Advertisement
Advertisement cookies are used to provide visitors with relevant ads and marketing campaigns. These cookies track visitors across websites and collect information to provide customized ads.
Others
Other uncategorized cookies are those that are being analyzed and have not been classified into a category as yet.
SAVE & ACCEPT